We really need a bet selection, which encourages more Banker bets, while taking advantage of all Player streaks at the same time.

The new SBSMP - Simple Baccarat System with the Mildest Progression does exactly that.  Its bet selection is ideally suited for this statistical outcome of Banker and Player decisions.  It produces lots of winning streaks in numerous conditions.  When the wins are not continuous, it generates W L W L type of choppy win loss results.  And this is where its mild progression comes handy winning those sequences as well.

The progression is the mildest one can ever have.  The bets will never exceed 5 units maximum and most runs are won within the first 3 stages.  The system is not of a grind type, producing 1 unit per run, and can end with a few units profit for a particular run.

The bet selection is probably one of the best ever.  It's very simple in the fact, that you need to know only three rules to follow and everything runs as mechanically as ever, not requiring any guesses at all.  It's also excellent if the table does not allow you to sit without placing any bets, because the system is very dynamic and you will be placing bets on every decision from the very beginning of the shoe until the end.

You may leave the shoe, of course, anytime you have reached a certain win target for that shoe.  That can be up to 10 units per shoe.  Or, if you prefer, you can stay at the same table and bet shoe after shoe.  The system will perform equally well.

With a 35 unit buy in, you can be safe to play for the entire day for as many shoes you like.  With a lifetime bankroll of 100 units, the system will generate continuous and consistent profits for you.

The bet selection is suitable for Baccarat only. It even generates profits using flat bets only. And its progression is so smart, it will work for you for any other even bet game, such as in Roulette, Craps, Sic-Bo and Casino War.  So, you can use any bet selection of your own preference with SBSMP's mild progression in the above games.

The system is not hard to learn.  In fact, the rules are very specific and learning only 3 rules makes it extremely simple to use.  One has to coordinate the bet selection with the use of the mild progression properly and they are harmonized ideally, as you will see in the 26 page system document.

A fully automated simulation is also provided to you.  It contains 1000 random Baccarat decisions and with the pressing of one button, it will generate a new set of 1000 random decisions, where you can see the outcome on a graph, as well as each separate decision, calculating the commissions for Banker wins after each bet.

Taking all commissions into account, the system generates 100 units for those 1000 decisions, or about 1 unit profit per 10 decisions in average, which makes about 7 units per shoe.  And since the progression is very mild, you can even use large size units to maximize your profits.  At $10 a bet, one can generate $70 per shoe.  At $100 units, one can make $700 per shoe.  You can start small and as you gain confidence, you can gradually increase your unit size using your winnings.

The chart below shows the performance of the system, reflecting the above results: 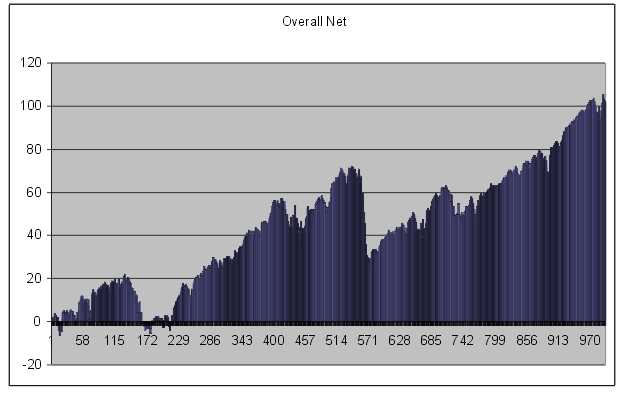 As you can see, within 300 decisions, the system generates about 30 units, within 500 decisions, about 50 units and within 1000 decisions about 100 units, so it's pretty much consistent and the profits are steadily growing.

The system goes for $120 and it's worth every penny.  It will pay itself off  within the first day of its use and then it's open ended profits for you.  You have a full money back guarantee on it within 30 days of your purchase upon your full satisfaction.