"identifies bias within even bet games"

For many years, gamblers have sought for a certain bias in games in order to take advantage and win.

At certain occasions this could be finding a biased roulette wheel, where some numbers hit more often than others because of its unevenness.

Or in sports betting, using arbitrage, which is an activity where one simultaneously places bets on all possible outcomes of an event at odds that guarantee profit, whatever the result of the event will be.

However, roulette wheels with physical imperfections are quickly replaced.

Bookmakers can detect arbitrage faults and cancel the bet, and one ends up betting high on only one side.

In my new system EBBS, that stands for Even Bet Bias System, I searched for a bias imbedded in even decisions and I was very successful finding it.

The bias is so strong that you close runs 3 times as many as one abandons them.

Each run is closed at 100+ units and the abandoned run costs us 155- units.  It's like winning 300 units for every loss of 155 units.  This is a great advantage and it works on the long run, since the bias is fixed for all outcomes.

The system applies to all even bets.  For Baccarat, for instance, EBBS generates +6013 units for 500 shoes, averaging about 12 units per shoe.

Here is a performance chart for 500 sampled shoes: 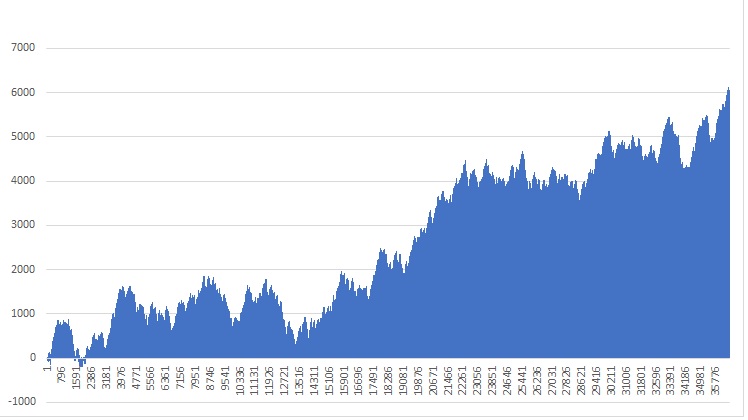 Very little overall drawdown of 205 units, which constitutes your lifetime bankroll and a maximum bet of 54 units for 500 shoes.

613 completed runs versus 211 abandoned ones, which gives us a great mathematical advantage.

The bias is really very strong. EBBS operates in two modes, one of them containing the bias.  In 500 shoes, one of the modes occurs 27,319 times and its opponent occurs 9,210 times, consistent with the 3 fold strength.

Obviously the system chooses to stay in the mode with the strongest bias and is flexible enough to switch to the other mode, when circumstances change.

If you close your run at the very beginning, you can go home with 100+ units after a shoe and a quarter, which is the case 75% of the time.  If not, you will still make your 100 unit profit per day playing a bit longer as the average profit kicks in.

For $20 extra you can have a printout of the system document shipped to your mailing address.

It's not more than 8 pages of easy reading.  Once you understand how the bias works, you will simply love it and say how didn't one think of it before!

As always, you have a full money back guarantee, if the system is not to your satisfaction, no questions asked, no strings attached, and you may return it within 30 days of your purchase.